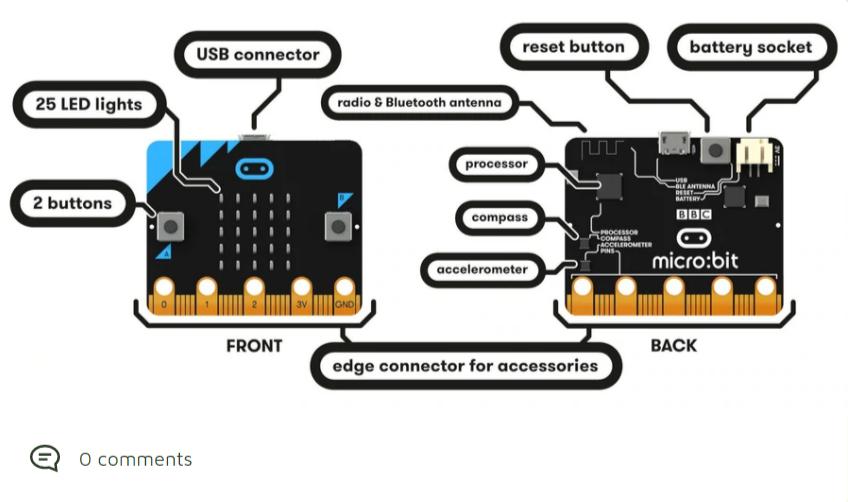 In the world of electronics, the software can be a bit of a black box. It’s hard to get your hands on it even if you have the skills to write programs. And Microbit resolves this huge gap with a simple hands-on solution.

Microbit is the best option to learn how computers work, program, and get creative with technology. Once you learn how to control the microbit, you’ll understand how smartphones, tablets, and games consoles work too!

If you want to start learning to program using Microbit and understand how things work, this blog is for you.

Microbit is a simple and affordable device that you can code and create your own digital projects. The possibilities are endless and the best part of it is that you can use it with as many compatible devices to make them do what you want.

It is a pocket-sized computer designed to make it easy for children (and adults) to get started with writing programs and controlling electronics. The idea behind the microbit is to make programming and controlling hardware much more accessible and entertaining than it currently is.

Microbit comes loaded with a sample code to get you started and offers an easy-to-use platform that helps people learn how to code, create and have fun with technology while making it accessible to all ages and skill levels.

Getting Started with Microbit

The Microbit is a compact, easy-to-use computer that you can code and customise to do interactive projects. It's designed to be a hands-on way to learn programming and electronics, which are the building blocks of computing.

The Microbit has 25 red LED lights, two programmable buttons, and an ARM Cortex M0 processor and Bluetooth for wireless control from smartphones, tablets, and desktop computers. It's also got a built-in accelerometer and magnetometer so you can sense motion and measure direction. You can devise several projects with this kit.

You can connect microbit to:

Next, you can control the above devices with code written in the Python programming language. You can write code to make an LED light up when you press a button, move a servo motor from side to side when you turn a knob or display an image on an RGB LED when a temperature changes.

Microbit has Bluetooth built-in, so you can send programs wirelessly from your computer to microbit and receive answers.

3 Microbit Projects to Understand How Software and Hardware Work Together

We can build a simple system that uses the temperature sensor to regularly log data from the microbit to a computer. We can have a simple interface that records the temperature every 10, 15 or 30 minutes. You can create a system to automatically reset the counter after a certain number of records.

If you want to try something a little more complex or if you’re itching to test out Raspberry Pi with microbit, then this is a great project for you.

In the home-automation project, you can use the microbit as a wireless remote control for a lamp to start with. The idea is to use it with a Raspberry Pi, but you can also use it with any other computer that has Python installed. You can connect LEDs and buttons to the microbit and control them to remotely operate a lamp from your computer.

Once this is successful, you can connect multiple devices to test your project.

You can create your own games with microbit quickly like:

Knowing the difference between each component and how they interact with each other goes a long way. Understanding how each component functions will help you build efficient software, as you'll be able to access sensors/actuators and create your fun projects with mcirobit.